The renowned danseuse Padmashri Shovana Narayan established ASAVARI institution in the year 1979. However, the roots of ASAVARI were laid in 1973 when grand-daughter of the famous Hindi writer, Jainendra Kumar Jain, Shruti Gupta insisted that she would like to receive training from the then up-coming Kathak dancer, Shovana Narayan, the foremost disciple of Pt. Birju Maharaj, who was speedily making her mark in the competitive field of classical dance. The death of Pt Shambhu Maharaj and the desire to assist the family became catalytic in Shovana-ji's acceptance to teach Kathak nuances to Shruti.

Asavari was shown the way and guided along by Guru Shovana Narayan's mother, Mrs. Lalita Narayan. Having a sharp and discerning eye, she contributed in no less measure to the training of students. Her creative flair and deep insight into Indian philosophy and thought were of great assistance to Shovana's choreographic compositions.

Asavari was formalized and registered in 1979. Imparting training in dance, theory and practical, with emphasis on nurturing a generation of intelligent, highly proficient dancers replete with technical, abhinaya skills and good grounding in theory of Kathak and Indian performing arts treatises, and manifesting thought processes through group and choreographic compositions, bespeaking depth, skill , finesse, aesthetics and artistry, became a way of life in Asavari.

Training: Under the aegis of Asavari, training in Kathak, vocal and instrumental music is being imparted to keen students. Training is imparted by her along with her guru-bhai, Guru Tirath Ajmani and other assistants. A staunch believer in the Gurukul-parampara, Shovana imparts to her disciples not only details of Kathak but also her own sensitivities and message of love, righteous practices and trust, which makes an artiste humane. Here she has successfully redefined the Guru-Shishya tradition and related it to the modern society. Her dedication as a guru of excellence can be seen in her disciples who have become acclaimed young dancers of the country. Some have utilized their training in Kathak to shine in related fields of arts: Shriya Sharan as a top star of Telugu films, Sharika Sharma, a documentary film-maker, Shruti Gupta Chandra as an eminent painter. Several are spreading the art of Kathak in far-away lands of USA, UK, Russia etc.

A staunch believer in the guru-shishya parampara, Shovana is of the view that in this tradition of teaching of essentials of dance, of spiritual relationship and mentoring, the Guru takes on the responsibility of the development and progress of the disciple in all ways so that the disciple grows into a well balanced and contributing member of society. Besides learning all aspects of technical nuances of the dance form, the intangible thread of the guru-shishya relationship helps the disciple to learn to appreciate the essence of Kathak, much beyond the technical aspects of the dance form, to unconsciously imbibe the ethos and spirit of dance as well as soak the thought process of the guru. It is an osmosis process that allows soaking up of 'dance' in the veins of a person.

Shovana's Asavari group is credited with many path-breaking works, whether they were sensitive portrayals of social issues or whether they were explorations of rhythmic dimensions in terms of sound-scapes and emotional-scapes! As early as 1983, she ventured to stage a ballet on the subject of environment that saw several new choreographies on till hitherto unexplored subjects including new and contemporary perspectives on myths and legends and iconic mythological characters from 1983-84 onwards.

Her creativity and fearlessness was also evident when she became the trend-setter in utilisation of lights to highlight the sound of footwork so unique to Kathak, married with the deep resonant strains of dhrupad music, first as a small item in 1981 and then in full-fledged item with group choreography, "Dhwani-Pratidhwani" in 1986-87. Also not lagging behind were revolutionary ideas in the Indian context of burning social themes such as female foeticide and incest as far back as in the early to mid-nineties of the twentieth century.

Added to these were path-breaking endeavours such as dancing without ankle bells, use of English text, use of long skirts as part of choreographies or use of drums and cymbals only as part of dance movements and choreography or to the riddles of Amir Khusro with audience participation highlighting the old-forgotten 'prahelika' tradition of Kathak.

Some of her trend-setting achievements can be summed as follows:

The first dancer to have presented dance ballets on:

In a way, Shovana's group choreographies and the banner of Asavari are synonymous and it is therefore no wonder that the Asavari group is often known as Shovana's troupe!

Name and Logo of ASAVARI

The name ASAVARI was chosen as it represents a morning raga and therefore symbolizes the dawn of new creation and hope, mirroring the efforts of Shovana-ji towards the propagation, preservation and promotion of classical arts. The raga Asavari represents perception of pure consciousness even while its 'audava-sampoorna' character shows irregular changes in direction and asymmetry as in life. In Rajasthani paintings, the ragini Asavari is shown playing the lute.

The logo represents the 'tanpura' strings within a sphere symbolizing the importance of music in all spheres of music and dance. The tautness of musical strings represents harmony, balance and strength not only in performing arts but in life as well. The four strings of the tanpura representing the four divine energies create a mood of meditation and contemplation. The drone emanating from it symbolizes the sound of the eternal 'OM', the sound of the cosmic void representing vibration of everything. These vibrations are motion and are related to the dance of the Supreme Nataraj. 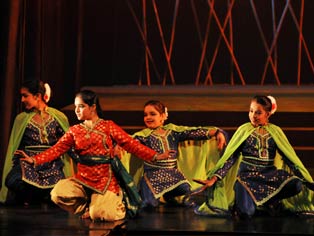 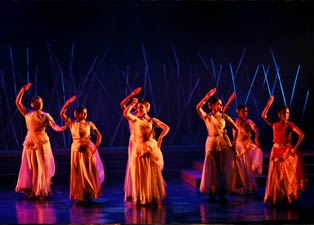 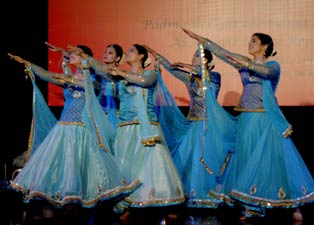 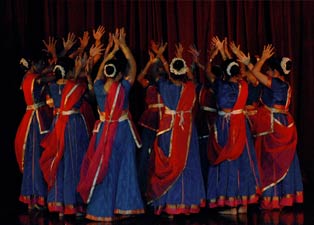 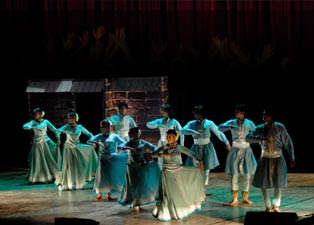 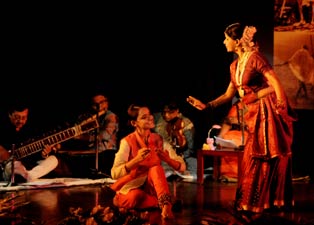